"House of Observance"
Things have still been quite busy at home and the studio. As I mentioned in my last blog entry, we've been making repairs and renovating our home (chaos!), I had a surprise show at the Carrollton Cultural Art Center (September),  participated in Mecca Fest Arts and Crafts Festival (Oct. 13-14th), participated in Chiha Arts and Crafts Festival (Oct. 27-28th), and now have the Carrollton Cotton Mill Farmer's Market and Holiday Bazaar to attend this coming weekend (Nov. 17th). in addition, I am VP of the Carrollton Artists Guild and VP on the SCRAP Bin executive board. I am thinking I may have spread myself a bit thin.
So just a reminder if you are reading this blog, come see us at the Holiday Bazaar on Nov. 17th at the Ag Center in Carrollton, GA.

I said I would keep up with this blog better but things have been quite busy since this past Fall. Several commissions, one being large made up of many smaller pieces. Once I had most of the commission work done I started working on building up an inventory during the Summer for art festivals in the Fall. I was in a comfortable position with my inventory level and then received a call asking if I could fill in for a cancelation of a show. I said yes but then found myself hustling to make enough artwork to fill the space. I already had about half the number needed (15 pieces) but it was still an effort to make the need amount in about a month, yes it was a short notice too (I was able to complete around ten more pieces, working up to the day I would begin to hang the show). The reception had a great turn-out and I enjoyed seeing familiar faces and meeting new ones.
Now I am again hustling, trying to create enough artwork for two upcoming art events this Fall: Mecca Fest in Carrollton, Ga and Chiaha Festival in Rome, GA. I hope I am able to get enough work completed! After these two events I then need to focus on the Cotton Mill Farmers Market Holiday Gift Bazaar & Farmers Market located in Carrollton, GA. As the name implies it is an arts and crafts event with farmer's market goodies. I have not received an invite to this event yet but I don't doubt one will be in the mail sometime in the near future.
So, back to work for me. If you are local to any of these events I hope to see you there!
Posted by Seth Fitts at Tuesday, September 18, 2012 0 comments I really had no strong plan when starting this piece. Well, I seldom do have strong plans when creating a piece except for what the subject might be and what color I use depending upon my mood. This piece just so happened to be a cat. The cat shape just sort of happened and so I followed through. I then became stuck. It was as if I could not bring myself to work on this piece any more so I set it to the side to work on other things needing to be done, like commission work!
When I found time, I came back to this piece with new eyes. I recommend this for others who are having trouble with working on a piece. Often looking at your work with new or fresh eyes can tell you what to next in the piece. So, with new eyes, I added a key to the cat painting and stewed over what to do next. The painting was set aside again.
Many days had passed when I found myself looking at this painting again. I was almost going to paint over the whole thing when I had the idea of adding a little bird. Then I had the idea of a pet. Which animal would be the pet? The bird? The cat? I like the idea of either one of the animals being the other's pet. I actually see this painting both ways, some days the bird is the pet and other days the cat is the pet of the bird.
This also makes me think of people and their pets. Who is really in charge? Who is really the pet?
Posted by Seth Fitts at Thursday, August 09, 2012 1 comments 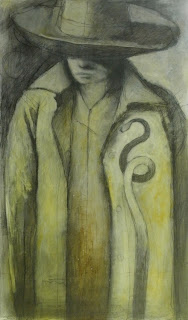 The Snake Charmer: St. George and the Dragon
It was a dark and not so stormy night. My wife and I were settling down for the night as we were quite tired and she went to make one more bathroom visit before we went to bed.  Upon entering the bathroom my wife noticed the water was still running from the previous visit she made.
"The flapper must be stuck", she thought and proceeded to remove the toilet tank lid reaching in to unstick the flapper. She had her hand half way in the tank when she saw this dark substance around the flapper hole and as soon as she thought "what is this?" she saw a head to her left.
"OHMYGOD-OHMYGOD-OHMYGOD!", I heard. I began running in her direction thinking she had hurt herself. I met her half way to the bathroom when she informed me "There's a snake in the toilet!".
"What? Oh no!", I exclaimed, among other things not repeatable. I made my way into the bathroom and slowly lifted the lid to get a peek at the creature. Sure enough there was a snake. It didn't look too big but it was bunched up in one corner, near the workings of the tank, and I could not get a good look to see if the snake was poisonous or not.
So, we stood there trying to figure out what to do. As it was 12:30 AM there was hardly anyone to call for help. We decided to try calling an animal removal service but there was no answer, even though the telephone book ad said "24 hour service". My wife remembered her sister had a grabber tool excellent for helping one with back trouble to pick items up off the ground without bending or squatting but not for grabbing snakes as we discovered later. On her way to get it she also called the local police to see if they knew of someone that could help with removal of the snake. The kind police officer offered his services and if he couldn't help, he would try animal control.
It felt like an hour had gone by, really probably only 10-15 minutes, when my wife and the police officer showed up simultaneously. She came down with the grabber tool and he pulled a paper bag out of the trunk of the police car, yes a paper bag. They came in, we asked him to excuse our mess (renovating and repairing) and he and I stepped into the bathroom.
The bag was set onto the closed toilet seat and I removed the lid. Yep, the snake was still in there. I took the grabber tool and proceeded to try and grab the snake. If you didn't know, snakes seem quite slippery when wet. I could not get a hold of it! Suddenly, the snake grew tired of me trying to grab it in the tank (with the tool of course) and suddenly began coming out of the tank!
"Whoa! Uh oh!", I exclaimed. The police officer jumped back as the snake came out of the toilet tank. What was originally thought to be a smallish snake turned out to be a near 4 foot serpent! The great beast hit the floor and was leaving the bathroom. I was stunned but snapped of it and made my split second decision to grab the snake with my bare hands! I swooped and grabbed the end of the snake and picked it up. There I was with 2-3 feet worth of snake extending out from my hand and another foot or so hanging down past where I was holding the snake.
"What do I do now?!", I thought to myself. I was stuck. Would it turn around and bite me? Would it slip from my grasp? I got my wits about me and slowly started moving my hand and the snake towards the paper bag, which was standing up and open waiting to help out. Amazingly the snake, still extended from my hand, went along with my motion and went into the bag. Once I put the rest of the snake in the bag, I quickly rolled the top down securing the snake inside. Whew! The police officer told us if we duct taped the bag, he would take it and release it down at the local river.
Many questions come up about this incident. How did the snake get into the toilet tank? What kind of snake was it? Why did the police officer have a paper bag in the trunk of his car?
Well, we did some research and discovered snakes, among other critters, can come up through the plumbing. Not the supply line but the other, "exit only", line. Alarming, yes. What still baffles us is how it got into the tank of the toilet, the tank not the bowl. We speculate it could of squeezed through an opening from the bowl to the tank. Snakes do not need much of an opening to get into a place they want. We also learned this was a type of Rat Snake, this one being a juvenile. I think I would have moved out that night if it was a full grown rat snake. The adults can reach lengths of 8 feet! As for the paper bag, it remains a mystery to me and my wife. I am just glad I had the bag and the help that came along with it.
Posted by Seth Fitts at Wednesday, July 25, 2012 3 comments 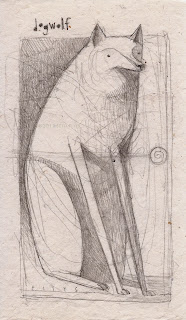 As I look at this drawing I think back to what was on my mind at the time. This image started off a a bit of an automatic drawing and then a dog figure began to take shape (I should note this drawing was worked on little by little while I would be waiting in the car while my wife went into a store or waiting for the dinner we ordered at a restaurant). As the drawing progressed I thought it would be interesting to blur the line between dog and wolf by giving the figure a mixture of features from both species. So, it is a dog or is it a wolf? I feel it is its own being.


Blue Bear by *SethFitts on deviantART

I had this idea of a blue bear while gathering artwork to send to True North Gallery in South Hamilton, MA. I do not really know why blue. There are multiple reasons I suppose: blue is a spiritual color; blue can be symbolic of the sky or the waters; depending upon how dark the blue, it can represent the many days of night that occur in the far north; blue is also symbolic of cold or coolness.
Instead of painting an actual species of bear, for this image I was thinking of what is the essence of the animal. I was thinking of their mass and size, their shape, stance and the way they move. Then I tried not to think and let things happen. The results were children's bookish, of which I do not mind, and a bit sweeter looking than I had intended. I like it none the less.
Posted by Seth Fitts at Saturday, June 23, 2012 0 comments


We are Headed North by *SethFitts on deviantART

Seth Fitts
I draw, paint and sometimes mess with photography, sculpture and ceramics.